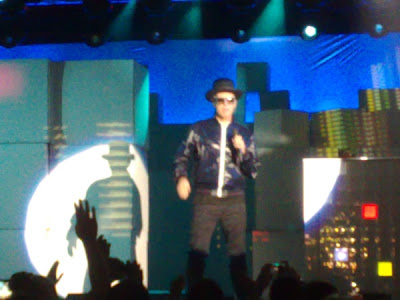 I WENT to the see the Pet Shop Boys in concert last night at Marina Hall in Brasilia. It was absolutely packed with Brazilian fans of all ages and gender, though I must admit that I must have seen the most gay men ever per square meter in Brasilia.

Although the concert was supposed to start at 9 pm, it didn't kick off until 10 pm, which didn't stop many people from dancing in the aisles to recorded music while drinking beer and talking to friends as they waited for the show to start.

Neil Tennant and Chris Lowe played mostly songs from their new album "Yes", including my favorite Did You See Me Coming? Unfortunately, many in the audience were not familiar with the lyrics of the songs from this album which was released in April of this year. That did not stop me from dancing and singing:

Did you see me coming?

Was I that obvious?

For all of a sudden

there were just two of us

You don't have to be

to know what's what

You don't have to be

to catch your slot

The night we met

was cold and wet

I needed a drink or two

I saw you standing there

The audience perked up when the Pet Shop Boys played some of their more popular songs such as Go West, It's a Sin and West End Girls.

Tickets to shows in Brazil are quite expensive compared to the US. I paid R$180 ($103) for my seat, but it was in a cordoned-off area and I was just 30 meters away from the stage. I also bought a gray PSB Pandemonium on tour t-shirt for R$60 ($34), which I am wearing as I write this. This was cheaper than my ticket for Cirque du Soleil's Quidam show, R$250 ($143), that I watched the night before.

While I would like to be able to pay less for my entertainment, I am grateful that there is now so much going on in Brasilia that one is often spoilt for choice. I remember growing up here in the 1970s when the only options were the Teatro Nacional with an occasional performance of the Bolshoi Ballet and American film festivals at the Casa Thomas Jefferson. Brasilia, you've come a long way baby!