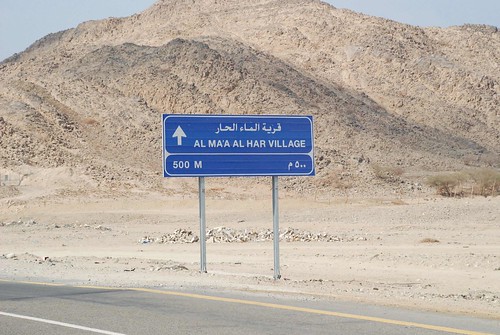 Driving was my colleague Usama, with Angelo our back seat navigator. Traveling on the Makkah Highway we drove until the main checkpoint into the holy city which screams "only Muslims allowed further" and then turned right to drive south to Al-Lith. We took the old road leading to Al-Lith, and passed many abandoned gasoline stations and mosques along the way. It was a quite interesting landscape, a sort of Saudi version of the American West. At the entrance to the town of Al-Lith we turned left and drove inland for 19 kilometers through a hilly landscape. Along the way we saw herds of goats alongside the road and Saudi school kids returning home from school, carrying their books wrapped up in prayer rugs.

I was excited to see the hot springs that I had heard so much about. Usama had a small road trip guide written by a British woman who had lived in Jeddah in the 1990s. Published by the Shell Oil company, the guide noted that the area still didn't have a paved road leading to the hot springs from Al-Lith. Unfortunately for us, the road is very well paved now, which means of course that the village of Meaa al Har (Hot Water village) was now easily accessible to all.

Driving on a road that curved between beautiful hills that kept changing color with the movement of the clouds and sunlight, we came upon an open area that had been cemented over to make it into a recreation area. A Saudi family was camping out beneath a canopy nearby, and a cow was wandering around. "Where are the springs?" I asked innocently. And my question was answered when I walked over to what looked like a big trench in the cement. There the yellowed waters of the hot springs lay barely moving, the heat rising off of it making its presence known. Trash consisting of discarded paper, plastic bags and bottles littered the whole trench, turning what might have been a pretty sight into a eyesore. 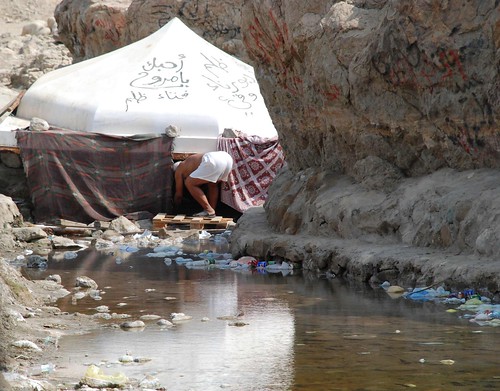 Over one end of the trench, someone had placed a fiberglass canopy, that was now covered in graffiti. Blocks of cloth had been hung from the sides of the canopy, that was wedged between rocks on either side of the trench, forming a mini sauna-like structure. And sure enough, a while later a pick-up truck pulled up with two old Saudi, white-haired men, who promptly stripped down to their boxer shorts and then climbed down into the stream and inside the hut.

We then wandered down the way to a grassy embankment which the hot springs seemed to flow into. It was more like a dribbly stream than a river. And there on the banks we saw local men in pants and shirts washing their clothes in the water.

After a quick lunch of sandwiches that we had brought with us from Jeddah, we drove off sorely disappointed by the pollution but amazed by the beauty of the hills. Our next stop was the city of Qunfudah which had what looked like a brand new Corniche. There we spotted a branch of the Jeddah Chanber of Commerce and Industry and of the Saudi chicken fastfood chain Al-Tazaj.

Driving back to Jeddah on the newer Jeddah-Al Lith highway as night fell, we witnessed the crazy driving of Saudi drivers who came straight at us in our lane with their lights ablaze, no doubt in their minds that we would chicken out and swerve onto the shoulder so as to allow them to pass without a head-on collision. No wonder there are so many accidents and fatalities on Saudi highways! 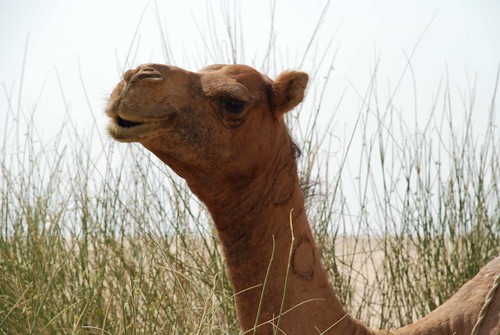 Hi, can you Abdul Hakeem tell me the way to over there? We are planing to go over there and see the place. :)

The real hot springs are very clean, they were a short drive off-road from the trashy area. Go back, they're great. This is a photo of a friend and my son there:

As an educated Saudi I am constantly disturbed by the lack of respect our natives have for our environment. It truly is a shame that we have allowed modern commerce and technology to disrupt our natural habitat in such a way. Something should be done about this... Thanks for the getting this out there….

I read your story in the NYTimes today and realized it's been many years since we met at a friend's in Manila. I'm still living in that bustling city, and warmly invite you to visit my home next time you're in town. You can reach me at kalingarice@yahoo.com. Best to you,