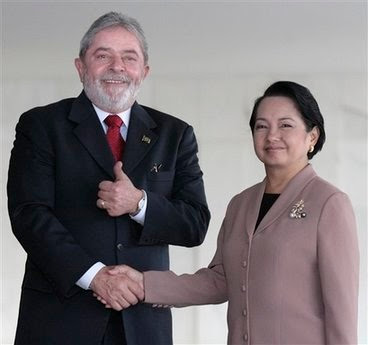 THE just concluded state visit of Philippine President Gloria Macapagal-Arroyo to Brazil this week unfortunately garnered hardly any attention back home and in Brazil.

The only stories I saw online were in the Diario do Pernambuco, a Recife newspaper, and the news service of the Brazilian Senate. The Senate news service article was eerily so similar to mine, that it may have been copied from my story for Arab News.

None of the Philippine papers seem to have sent reporters along with to cover the president's trip, with the Philippine Star reduced at one point to using a tiny story from the Chinese news agency Xinhua about Arroyo arriving in Rio de Janeiro to talk with Brazilian investors.

There wasn't single story in the Correio Braziliense, the biggest paper in the capital Brasilia, and there was no coverage on Globo's Jornal Nacional, the most popular news show on Brazilian television.

I interviewed the Philippine Secretary of Social Welfare and Development Esperanza Cabral this week in Brasilia, and she spoke to me about the new regulations that specify the punishments for those caught trying to buy or sell human organs in the Philippines. My story about it appeared today in Arab News. Click here to read it.

Arroyo's trip to Brazil was nevertheless a success, with several bilateral accords signed, including one on cooperation in the development of biofuels, which Brazil has much experience in, and another in agriculture.