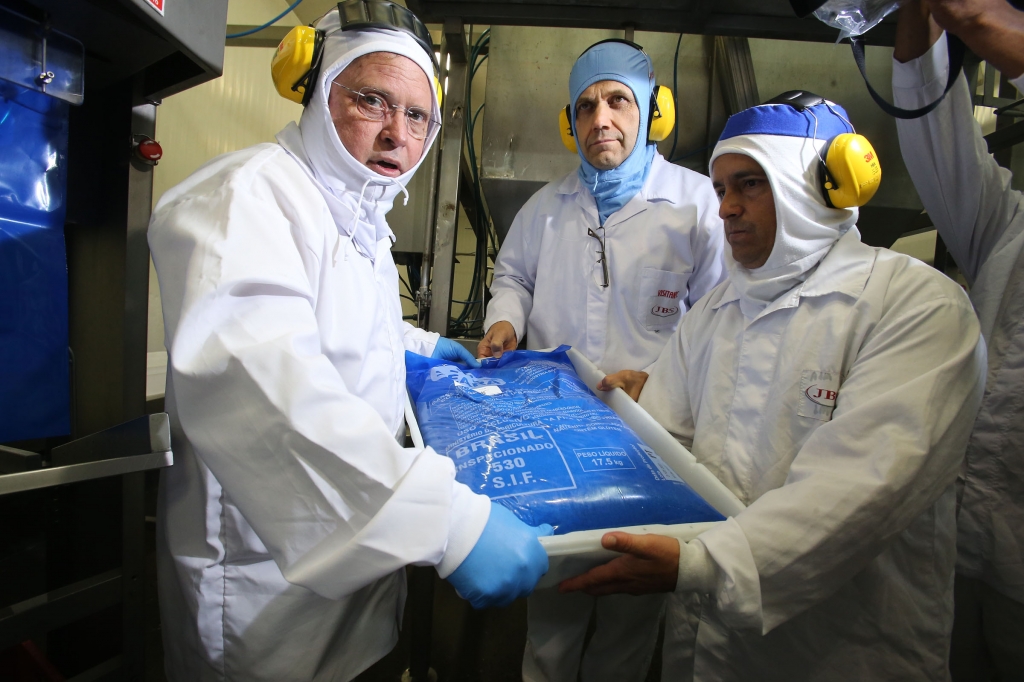 UPDATE: The Saudi Food and Drug Authority announced late on March 22, 2017, that the Kingdom was suspending the import of meat from four Brazilian meat processing plants.

BRASILIA—The Saudi envoy to Brazil said that he and other foreign ambassadors in the Brazilian capital are waiting for the conclusions of the Brazilian government’s investigation into the bribing of meat inspectors and alleged export of rotten meat. Thirty-three inspectors and meat company officials have been arrested, and three meat-processing plants have been closed.

Several countries have already put a temporary freeze on imports of Brazilian meat, including China, South Korea and Chile. One of the meat companies being investigated exported chicken parts to Saudi Arabia and the UAE.

Ambassador Hisham al-Qahtani told me in an interview that Saudi authorities are aware of the accusations that rotten meat was exported from Brazil. He was one of the 33 ambassadors that attended a dinner hosted by Brazilian President Michel Temer on Sunday night at a posh barbecue restaurant in Brasilia to assure them of the safety and quality of Brazilian meat.

“President Temer and Agriculture Minister Blairo Maggi explained everything that is happening,” said Qahtani. “They will do an investigation and will inform us of their findings. It is a very complicated situation, so we have to wait to see what the results of the investigation will tell us.”

Qahtani noted that Saudi authorities are aware of the situation. “I don’t know what they will decide in the Kingdom, but they are already aware of the investigation,” he said.

Saudi Arabia is the largest importer of Brazilian chicken in the world. According to Brazilian National Agricultural Society statistics, the kingdom imported more than US$1.150 billion in chicken products from Brazil, which amounted to 746,000 tons, in 2016.

The Saudi Food and Drug Authority (SFDA) is responsible for monitoring food safety in the Kingdom, and last sent a team of inspectors to visit Brazilian meat processing plants in 2015, when the Kingdom lifted its three-year ban on Brazilian beef.

Brazilian Ambassador to the Kingdom Flavio Marega met the head of the SFDA on March 22 and explained to him the ongoing investigation dubbed "Weak Meat" being undertaken by the Federal Police.

Brazil’s ambassador to the Kingdom told me in an interview that he is going to meet with SFDA officials on Wednesday in Riyadh to brief them on the Brazilian government’s investigation.

“So far I have not received any special instructions on how to calm the fears of Saudi consumers,” ambassador Flavio Marega said. “But we are basing our information on what President Michel Temer said at the dinner with foreign ambassadors. I am meeting with the head of the SFDA on Wednesday, and will find out then what the position of the Saudi government is.”

The Brazilian Agriculture Ministry posted a list on its website on Monday of the meat companies being investigated by the ministry and the Federal Police for allegedly exporting adulterated meat products. The Seara company is listed as having exported frozen chicken parts to the Kingdom, Iraq, Kuwait, Qatar, the UAE, and the European Union. Seara is owned by the giant JBS Group, the largest meat company in the world. In 2016 it had earnings before taxes of US$1 billion.

The Federation of Muslim Associations in Brazil (Fambras), which does halal certification of Brazilian chicken and beef exports to Muslim countries, said in a statement on its website that the quality of Brazilian halal meat was excellent and that it makes sure that Brazilian meat processors follow all of the necessary rules to produce, store and sell meat suitable for the consumption of Muslims.

“I do not believe that the Saudi authorities will impose restrictions on Brazilian meat since they already follow and inspect the procedures done here in Brazil and they know that there is no risk,” said Ali Zoghbi, the vice-president of Fambras, in an interview from Sao Paulo.

President Temer defended the quality of Brazilian meat, saying on Monday that all of the country’s production of meat could not be devalued because of the actions of a few. “We have more or less 4,850 meat processing plants in Brazil, and only three of them have been shut, apart from the 18 or 19 plants that are going to be investigated,” he said.

“I think the investigation is more centered on corruption rather than the quality of Brazilian meat,” said Miguel Daoud, a business consultant, in an interview with Globo News. “Eighty percent of the meat produced in Brazil is consumed locally. I am not that pessimistic, although this is a very serious investigation by the Federal Police,” he added.

Many analysts have noted that Brazil has built its reputation as an exporter of excellent quality meat products over the past ten years, and that this scandal has the possibility of setting back Brazil’s meat exports by five years.