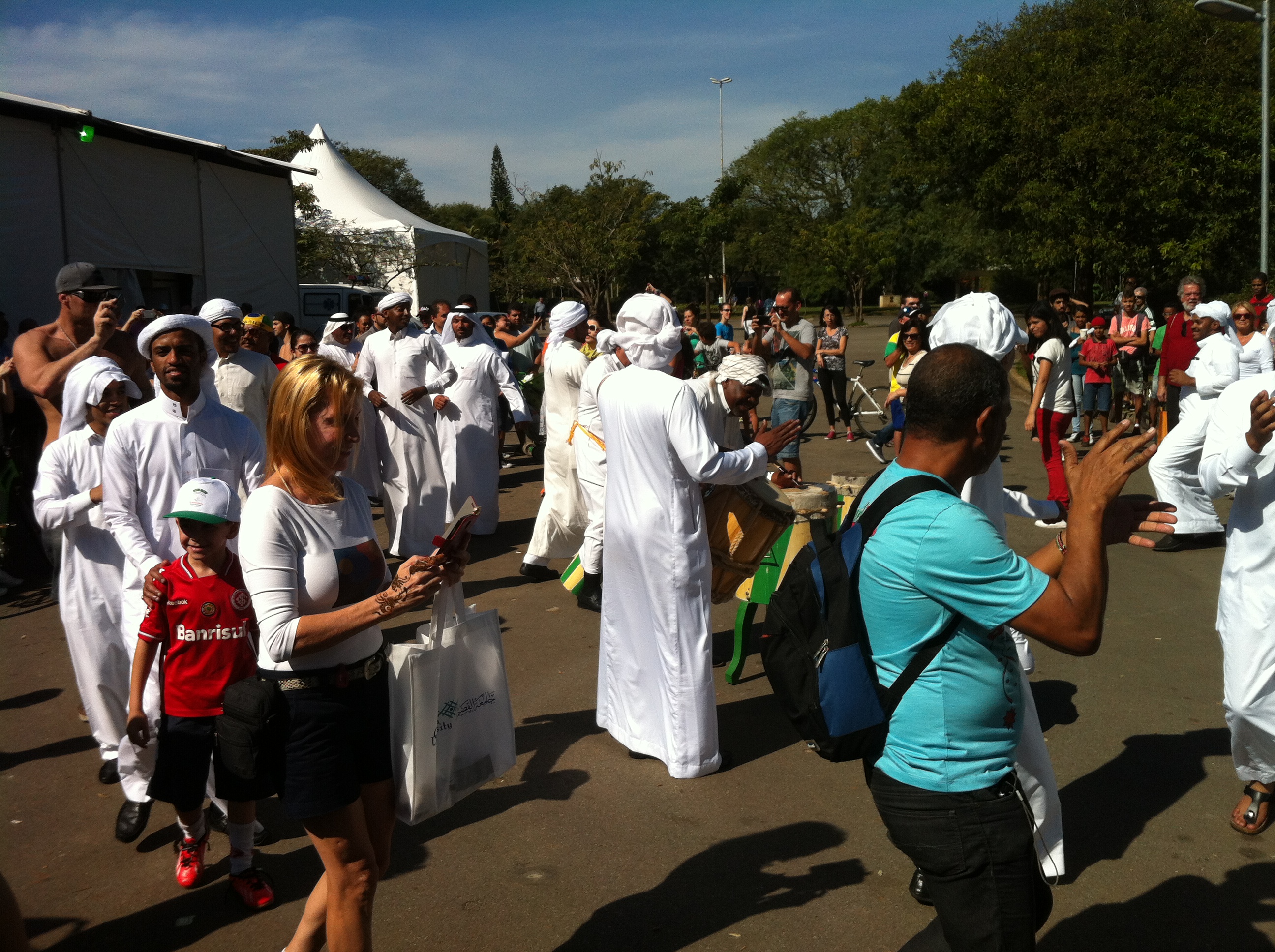 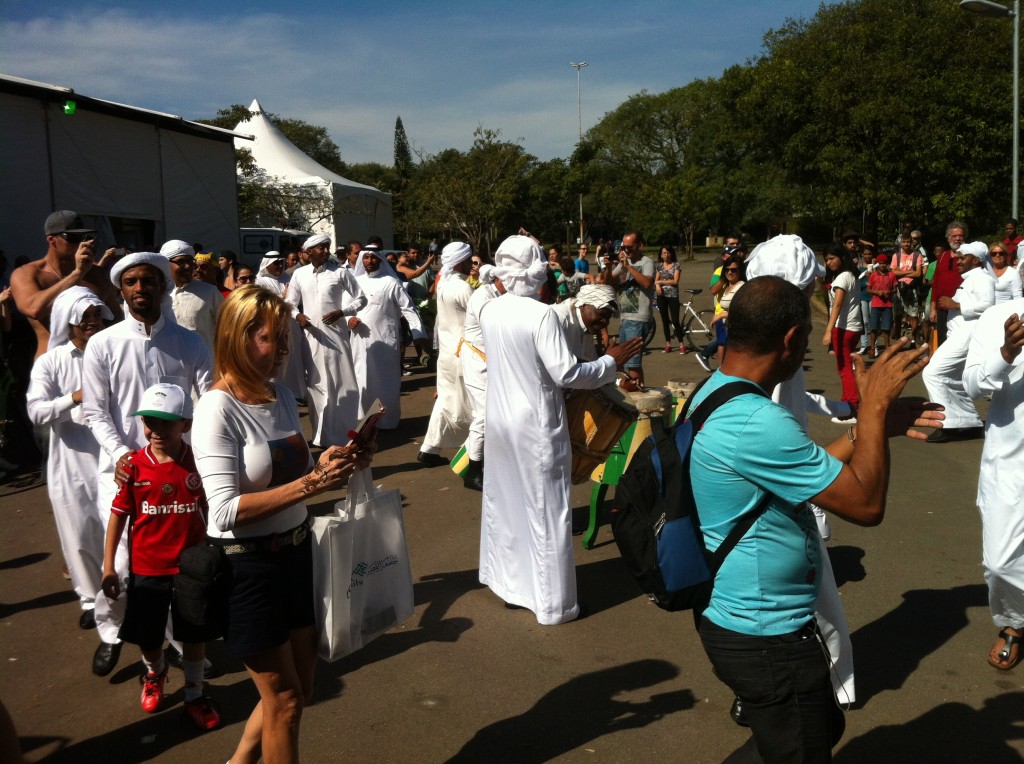 Brazilians dance with a Saudi folklore group in Ibirapuera Park in Sao Paulo, Brazil, on June 8, 2014. (Photo by Rasheed Abou-Alsamh)

I never thought I'd see Saudis dancing at Ibirapuera Park in São Paulo, the business center and largest city in Brazil, but that's exactly what I witnessed last Sunday. These dancers, all men, were part of the Saudi Cultural Days event organized by the Saudi Ministry of Culture and Information.

I learned that this cultural event was unfolding in São Paulo by chance through my email on Friday evening. In the email there was a link to a story of the Brazil-Arab News Agency (Anba) about the festival. I was surprised and excited to learn of the event and started planning my trip to São Paulo to witness the event up close. With my flight and hotel paid via the Internet, I flew from Brasilia to São Paulo on Saturday afternoon. On Sunday morning I was in a taxi heading to the park.

“We want to be close to the Brazilian people because we love them and we want a closer relationship. That is why we want to culturally expose ourselves, so they may learn more about us,” said Saudi Deputy Minister for Cultural Relations Abdulaziz Almulhem to Anba. And the Saudis certainly succeeded in exposing themselves culturally in São Paulo.

Housed in a giant tent beside the Afro-Brazilian Museum in Ibirapuera Park, the central area was a stage for the presentation of the various folk dance groups with their accompanying musicians. In adjacent areas were assembled booths with Saudi artists, of both sexes, showing off their paintings. The Saudi photographer Susan Baaghil, a pioneer as the first woman to establish a commercial studio in Saudi Arabia, occupied a large space taking pictures of Brazilians dressed in typical clothes Saudis. Another booth very much coveted by female visitors was the henna stand, where two Saudi women drew pretty designs on their hands using henna, a typical decoration that Arab women use for special occasions like weddings and parties. Another crowded booth was the calligraphy one, where a Saudi woman and man wrote participants' names in Arabic using various colored inks. Visitors washed all of this down with Zamzam water and three tons of imported Saudi dates.

The joy of the Saudi dancers and their Brazilian spectators was contagious. I think that this part of the exhibition was the favorite of visitors in São Paulo. At one point, one of the folkloric groups began a dance at the main entrance, and soon had attracted a small crowd of Brazilians, beating their palms to the rhythm of drums and a flute, many dancing in a circle around the musicians. There were women and men, all savoring the sounds of Arabic music on a sunny Sunday morning. How wonderful this was, I thought to myself.

While I waited in line to have my name written in Arabic, I observed two Brazilian sisters taking a look at jewelry being sold by a Saudi craftsman. One of them bought a pink bracelet for the bargain price of five reais (SR8.30). “Did you already know something about Saudi Arabia before coming here?” I asked one of them. “No, it's the first time I saw something about Saudi Arabia,” she replied.

Another section that attracted much attention was the Bedouin tent, where visitors could sit on cushions and colorful rugs and drink Arabic coffee and eat dates while posing for photos. In all 36 dancers, 17 musicians, and four painters participated in the exhibition which ran for four days.

For me, this festival showed the incredible power of artistic and cultural diplomacy. Of course, in a way, events like this reduce such a rich and complex culture such as the Saudi one to a few clichés, like dates and men wearing thobes, but they are also an important way to bring people together so that they can see similarities in the songs, dances and arts of each other.

It was great to attend a joyous Arab event that did not deal with politics or the disastrous uprisings of the Arab Spring. The Saudi ambassador to Brazil, Hisham Alqahtani, said he hopes that Brazilian cultural events can take place in the near future in Saudi Arabia, so that the Saudi people may know Brazilian culture. I, for one, certainly hope so!