So what if Obama bowed to Saudi king?!

AMERICAN commentators and bloggers were up in arms about President Barak Obama's gaffe at the G-20 Summit in London. What was his crime? To bow when he met Saudi King Abdullah. Watch the video above to see how it happened.

One American blogger had this to say about the incident: "Much worse than the curtsy to the Queen of England was the deep subservient bow to the Saudi King. When Obama met Saudi Arabian King Abdullah, he sank into a bow that made some watching wonder if he was fixing to lick the king’s shoes. At its best it is unbecoming of an American President to bow to a foreign king, or its just clueless.

"Does bowing, deep bowing, to the King of Saudi Arabia leave much doubt as to where Obama’s loyalties lie? His has made numerous attempts to court the Arab world since he’s been president."

As this same blogger rightly notes, Americans are not supposed to bow or curtsey in front of royalty, an attitude left over from the American Revolutionary war of 1776 and its fight against royal British rule and for independence. Nevertheless, Obama and his wife Michelle reportedly did a little bow in front of British Queen Elizabeth II. But what upset some Americans was the deep bow that President Obama did in front of Abdullah as he held his hand. If you watch the video above you will see what I mean. But there is a man blocking a full view of what Obama actually did. Did he kiss Abdullah's hand or merely hold his head a few inches above the king's hand? We will probably never know unless Obama clarifies it in an interview.

I think Obama was just showing great respect for an 85-year-old monarch, who according to reports is very friendly and grandfatherly, and probably provokes feelings of respect and warmth in people when they meet him.

Along with this fake controversy came the fawning and shallow media coverage of the Obama's visit to London and then France. British newspapers gushed over Michelle Obama, with the Times of London asking in a headline Carla who?, in reference to French President Nicholas Sarkozy's wife Carla Bruni who a few months ago wowed Britain with her good looks and stylish wardrobe.

Even the New York Times went silly devoting a whole article to how British girls were so impressed that she asked them all to call her "Michelle". That was considered newsworthy?

And don't forget that although Obama's predecessor George W. Bush was never photographed bowing infront of King Abdullah, he was snapped holding hands with him! 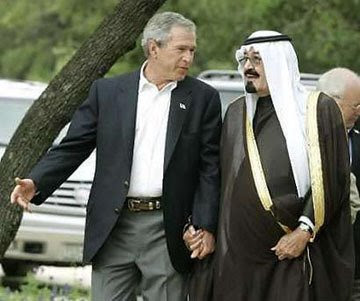 By:
Rasheed Abou-Alsamh
Tags:
Saudi Arabia
US
Share this:

Hi, Rasheed. Been awhile since I visited your blog. =D Glad to be reading your posts again.

Hey, it's funny how Americans can't seem to stop proving the rest of the world right about their ignorance and insecurity ain't it. Your President's doing his best to improve your country's foreign relations so you guys won't come off as a banana republic and you chastise him? Incredible.

Obama is a fool. Why anybody should be nice to anyone from the Houase of Saud I don't know. These people are evil and intolerant. These people are behind much of the hate and violence that is preached against non-Muslims in mosques around the world.