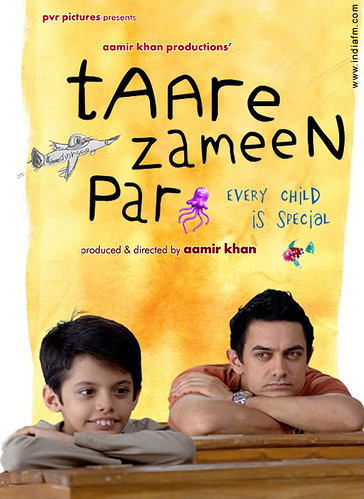 I WATCHED Aamir Khan’s new movie “Taare Zameen Par: Every Child Is Special” (“Stars on Earth”) last night at the National Theatre on Hamdan Street with my new friend from Kerala Moha.

I must admit that I didn’t know what to expect from the film as I had not read anything about it before seeing it. To say that I was pleasantly surprised is to put it lightly. I was delightfully entertained by the new actor Darsheel Safary who plays the title role of Ishaan Awasthi, a nine-year-old boy from a middle class family who is more interested in catching tadpoles and playing with the neighborhood dogs than studying at school because of his dyslexia.

Bollywood star Aamir Khan directed and stars in the film as a sensitive art teacher who once was also dyslexic and thus can totally relate to Ishaan when he becomes his art teacher when he is sent away to boarding school after flunking the third grade two times. Khan’s entrance into the story, which comes half way into the movie, is done in a loud musical fashion, but is rather scary as he’s dressed up as a maniacal clown with pointy ears.

The film is rather melodramatic in certain places, with over-extended shots of Khan’s bloodshot eyes staring worryingly at Ishaan, and tear-jerker scenes of Ishaan’s mother, played by the excellent Tisca Chopra. At times too “Taare Zameen Par” looks like an advertisement for the “Incredible India!” tourism campaign, what with the shots of Mumbai street life and the fashion-trendy scenes of Khan wearing different outfits. Despite these minor irritations, the acting overall is excellent and the production design by Shruti Gupte is superb. The interior of Ishaan’s house, done in deep maroons and mustard yellows reminded me of the excellent production design that is always seen in Philippine movies produced by ABS-CBN’s Star Cinema.

I highly recommend this movie to everyone, which has subtitles in both English and Arabic.

Very nice songs and movie ...this is one of the favorite best movies... i like it...
Taare Zameen Par