The sad fate of Harry Nicolaides 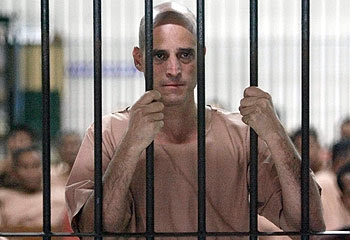 THE first I ever heard of the Australian writer Harry Nicolaides was when he emailed me in 2007 from Riyadh when I was still working at Arab News in Jeddah, Saudi Arabia. He told me that he was a teacher at the Al Yamamah College there, and asked me if the paper would be interested in details of the raid by the religious police (muttawaen) on a school play put on by the students in November 2006. There had been a general scuffle, with fisticuffs, and had been filmed by a student with a cellphone. Unsurprisingly, the video clip was soon circulating on the Internet and via e-mail.

Regular police were quickly called in and several of the religious police and students were arrested. A thorough investigation was promised, but I cannot really remember what happened in the end. In any event, Arab News wrote about what happened only once.

I wrote back to him and asked him for more details, but he was not able to provide us with any. I heard from him again a few months later when he emailed me to say he was leaving the Kingdom, heading back to Australia, and could I find some recent pictures if public beheadings for a story he was writing on the Saudi justice system! I was astonished at his request, as I thought he, having lived in Riyadh for a year, should have known that it was illegal to photograph beheadings, and that if caught one could be jailed for doing so.

I wrote back telling him "no" we didn't have such photos, and doubted he would be able to find any.

I never heard from him again. So I was quite surprised this week when I saw him on CNN being interviewed from a Thai jail where he had been imprisoned since August 2008 for slandering the Thai crown prince and king. I couldn't quite place him at first, but after checking my saved emails with him, I realized that he and the distressed man I had seen on my television screen were one and the same.

It turns out that Harry wrote a novel entitled Verisimilitude and apparently self-published it in Thailand in 2005. He sent several copies of it to various Thai government departments, including the National Library and the King's office. Several people online have claimed that Harry never actually wrote the novel, but an excerpt of it is available here online in PDF format.

The book would have sunk into oblivion, and Harry probably didn't think much of the silence from the various Thai government departments who had received copies of his book. He actually worked at a Thai university as a teacher in the intervening years, and traveled in and out of Thailand several times (including going to work for a year in Saudi Arabia from 2006-2007), and was never stopped or questioned by Thai authorities, that is until August 31, 2008.

I printed off the first three chapters and apart from being slightly bored with Harry's description of the Thai countryside, did not find anything to suggest other than a deep concern and love for Thailand, Thais and their culture.

Some commentators online, like this one, have called Harry a fool for risking his life and freedom by criticizing the Thai Crown Prince for allegedly having sent one of his wives and her children into exile for cheating on him.

As many Thai officials have pointed out, the King himself has spoken out against the law that criminalizes any criticism of the King or the monarchy. This law was passed ostensibly to protect the royals from public bashings that they cannot defend themselves from publicly because of protocol.

The King will probably pardon Harry soon and have him deported home. It's really a shame that anyone should be imprisoned for criticizing the royalty, especially someone like Harry who so obviously cares about the future of Thailand. I say free him now, apologize to him, and allow him to stay in Thailand if likes. That would be the decent thing to do.

In the end Harry is guilty of only one thing: Naivety.