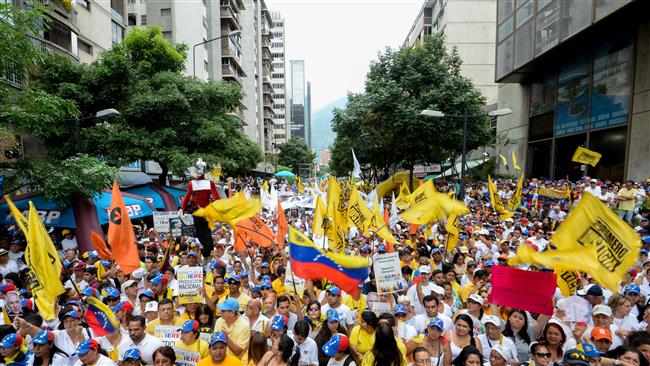 A divided opposition in Venezuela is trying to put their differences aside to fight the political repression of President Nicolas Maduro, attempt to stop the country’s economy from sliding even more into depression, and to lower sky-high inflation.

President Maduro, an avid socialist, and protege of the late President Hugo Chavez, who is responsible for Venezuela’s voyage down the road to allegedly become a worker’s republic, has resorted to imprisoning political opponents and protesters. On the economic front, things have not gone well. The economy has been in a downward spiral for the past few years, ever since the international price of crude oil plunged in 2014. The country is dependent on imports for most of its food and goods, and with strict price controls enforced by the government, and forced nationalizations of whole sectors, this has led to widespread shortages of everything from soap, meat, sugar to toilet paper.

Despite opposition parties winning a majority of seats in Parliament in the December 2015 elections, 112 out of 167 seats, the Maduro government refuses to share power with them or even talk with them. For his new year address to the nation, Maduro did not deliver his speech in front of Parliament as is customary, but in front of the Supreme Court which is packed with his supporters.

This has caused regular street protests against the government, and Maduro has responded by having protesters arrested. Foro Penal, an NGO of lawyers who came together to defend protesters who get arrested, estimates that between 2013 and 2016, 429 protesters were arrested, and that 106 were still in jail at the end of December 2016. It estimates that there were 2,732 detentions in Venezuela for political reasons in 2016 alone, and that from January 2014 to December 2016 there were 6,831 political detentions.

“Maduro has created a sort of revolving door, a few leave and many more come in,” said Gonzalo Himiob, one of Foro Penal’s directors, to the Brazilian newspaper O Globo last month. “The economic and social crisis is very serious and will cause many more protests,” he added.

“The government must either file formal charges and try people in open court, or release them. Indefinite holding of individuals without trial makes a mockery of the judicial system,” said Miguel Tinker Salas, a Venezuelan historian and professor of Latin American Studies at Pomona College in California, in an interview with Arab News.

The opposition started a petition last year to have Maduro removed from office for incompetence, but despite getting the required signatures from 20 percent of registered voters, election officials stopped the petition in October 2016. A poll by Datanalisis at the time found that 90 percent of the population believed the country was going in the wrong direction, and 76 percent wanted Maduro to leave office.

In January 2017 Maduro appointed the hard line governor of Aragua, Tareck El Aissami, as his new vice president. By the end of the month he gave Aissami economic decree powers, making him one of the most powerful men in Venezuela. This caused the opposition to rethink their strategy of removing Maduro from president, since the vice president would take over in such a scenario.

Although opposition parties have formed a coalition called the Democratic Unity Roundtable, known by its Spanish acronym MUD, they have been severely divided, able at times to rouse large street protests across the country against Maduro’s rule, and at other times unable to.

“The opposition parties in Venezuela are divided, and there are calls from Maria Corina Machado and others to disband the MUD and form a new organization. Some in the opposition want a recall; while others prefer to oust Maduro through street actions, and yet others would rather confront the government in statewide elections for governor later this year. They hope that regional elections would set the stage for presidential elections where they hope to defeat Maduro,” Salas said.

Both the Union of South American Nations (Unasur) and the Vatican have been trying to negotiate an agreement between the Maduro government and the opposition, but to no avail so far. The secretary general of the Organization of American States, Luis Almagro, has been especially critical of Maduro’s repression of opposition protests, and pointed out in an interview to the El Observador newspaper at the end of January that there was a need to act now in Venezuela because the mediation efforts of Unasur and Vatican had been a failure.

“People have been deprived of their constitutional right to recall President Maduro, political prisoners are still incarcerated, violence is rampant, and there is widespread hunger. The international community cannot wait any longer and must act now,” Almagro said.

But Salas believes that the OAS has been sidelined in Venezuela because of its criticism of Maduro’s rule.

“The secretary of the OAS, Almagro, has engaged in sharp personal attacks on the government, while turning a blind eye to issues in other countries such as Mexico. As a result the OAS has been largely sidelined in Venezuela. The key players have been Unasur and the Catholic Church. With Ernesto Samper’s resignation as secretary general of Unasur, it is still unclear what future role the body will play in Venezuela,” said Salas.

After not having much to show for after years of street protests, the opposition MUD coalition is now planning new ways of appealing to the Venezuelan electorate.

Jesus Torrealba, the secretary general of MUD, told the Americas Quarterly that they would be doing more outreach to poorer voters this year. He said they would rotate its leadership and include civil society in its decision making.