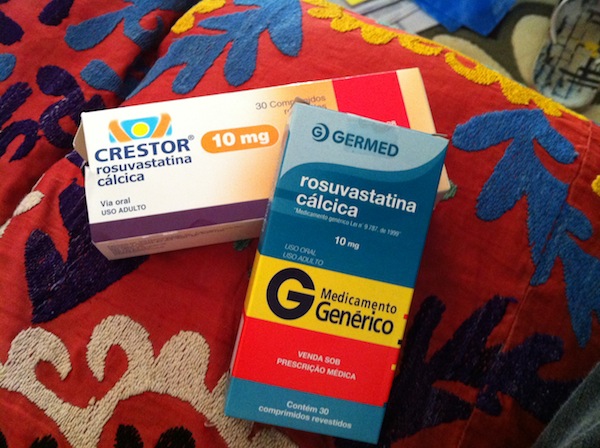 I WAS pleasantly surprised on Thursday (28/04/2011) when I discovered at the pharmacy that my anti-cholesterol medicine Crestor is now available in a much cheaper generic form!

Astra-Zeneca claims that its patent on Crestor is valid until at least 2016, and had succeeded in getting a preliminary judicial injunction stopping local companies from breaking the patent in order to manufacture generic versions. But the Brazilian government thought otherwise and got the injunction overturned, allowing local drug companies to manufacture generic versions of the drug starting in March. I bought generic rosuvastatina calcica made by Germed, but at least three other drug companies will soon have their own versions on the market. Astra-Zeneca said it will take further legal measures to try and protect its patent, but it seems unlikely that any Brazilian court will rule in their favor.

I understand the argument made by big drug companies that they have to be able to charge premium rates for a guaranteed number of years, by having an exclusive patent on drugs, in order to be able to finance the research and development of new drugs, which is expensive to undertake. But I also think that consumers should not be forced to pay through their noses for essential drugs that help them stay healthy just to pad the profits of these firms.

Brazil is on the right path by ending the exclusive patents on drugs that have already been on the market for at least five years. Viva generic drugs!

Lipitor lost its patent last month too. that is also one of the cholesterol lowering drugs now available in the market as generic. interestingly few months before this drug was to loose its patent some data was published that reported higher doses of another already generic drug, simvastatin, were potentially dangerous. made some wonder if this was part of an effort to make physicians shift from using a tried tested drug, simvastatin, to one that was about to loose its patent, lipitor and in this way make some quick last minute money. strange how people think.