Why Taking a Maid on Vacation is Absurd 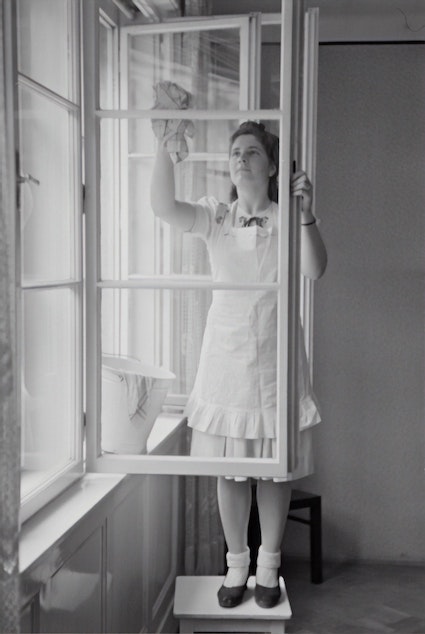 I WAS talking to a female Saudi friend the other day and when I mentioned that I thought it was ridiculous that so many Saudi families took their maids with them on vacation to help take care of their children, she snapped and said: “What’s wrong with that? If they can afford it, why not?”

I replied that it wasn’t a matter of whether or not Saudis can afford to have house help, but that the phenomenon of seeing Saudi families abroad with their maids was symptomatic of a much deeper problem that permeates all of Saudi society, that of helplessness which stems from laziness.

Another Saudi colleague reinforced the lazy characterization of many Saudis by telling me that when she went to the Durrat al-Arous beach resort near Jeddah for five days recently, most of the Saudis there slept the whole day, rising only at 4:30 p.m. to have their first meal of the day at 5 p.m.

“They spent the whole day sleeping and stayed up the whole night swimming,” she told me.What’s wrong with that, many will ask, especially in the searing heat of summer where it makes sense to limit daytime activities and do things at night when it is cooler?

The truth is that the Saudi generation born after the first oil boom ended in around 1983, is an especially spoiled one. They have grown up with maids and drivers at their beck and call; have been spoiled by parents who gave them everything from expensive clothes to cars to make them happy. This is a generation that hasn’t known the deprivations of the pre-oil boom days when Saudi Arabia was a much poorer nation that did not have many luxuries.

And that is where my critics get me wrong. I’m not begrudging any of the luxuries that we Saudis can afford now. Far from it. What I don’t like is to see a nation of spoiled brat men and women who feel that they cannot live without having a foreign maid around to boss around and do their dirty work for them.

“I’ve grown up with maids and I’m used to them making my bed everyday and taking care of me,” the angry friend told me. “When I’m abroad without a maid, I don’t make my bed,” she confessed.

But do we really want to be a nation of people who cannot make our own beds, know how to wash our own bathrooms and clothes, or cook our own food just because we can afford to hire poor foreigners to do all of these things for us?

Many Saudis say they treat their house help like a member of their own families, and that their maids love traveling abroad with them as this is the only opportunity they’ll ever have to see the world.

To me that sounds like the colonial master-slave relationship, where some slave owners would treat their slaves kindly, even fathering children with them, but still not setting them free. Being a maid in today’s world is a modern form of slavery in my opinion, especially in this country where the women who come here as maids suffer from culture shock, are often locked up in the houses they live in, and don’t have family and relatives nearby to give them solace and support.

Everything is not bleak on Saudi front though. We now have Saudi cashiers in supermarkets, working at Starbucks as baristas, and when I recently renewed my driver’s license in Jeddah was pleasantly surprised at the efficiency of the traffic police, which enabled me to get my new license within hours.

But the fact remains that we are still a nation dangerously addicted to foreign labor. When Saudi children are brought up to clean up their own rooms, help their mother in the kitchen, take out the trash and go shopping for food at the supermarket, then we will have a new generation of Saudis that are not spoiled beyond belief, and who most importantly are self-sufficient and not helpless.

Having a maid and driver should be a privilege that we earn with hard work and effort, not considered a right just because we have the wealth that affords us the capability of doing nothing for ourselves and being utterly dependent on someone else to do things for us. Once we manage to change this warped mentality, Saudi Arabia will be on the road to a much brighter and better future. Until then, expect the spoiled brats to reign with their cluelessness which is so disappointing and sad.****Video Clip Rape Raises More Questions than Answers

THE video clip that was shown last week on ABS-CBN television allegedly showing a Filipino maid in Saudi Arabia being violently raped by her employer’s adult son, was disturbing to say the least. But the way the clip was sensationalized by the TV network left more questions than answers.

The clip, filmed on a cell phone, was taken to ABS-CBN in Manila by a Filipino maid who had recently returned home from Saudi Arabia. She claimed to be a friend of the victim, called Melissa, and said that the victim had been repeatedly raped by her employer’s son and his friends. She said she wanted the repeated sexual assault to be brought to the attention of the authorities. The clip was then shown to Vice President Noli de Castro, who ordered various government departments to track down Melissa, rescue her and file charges against her rapists.

The trouble is that the supposed friend of Melissa was not able to give Philippine authorities an address of where Melissa works. According to OWWA, there are 600 OFWs in Saudi Arabia with the first name “Melissa”.

It has now been reported that Melissa is somewhere in Jeddah and a reported male relative of hers, who is also in Saudi, has been interviewed on television confirming the ordeal of Melissa.What is so frustrating about the whole situation is the apparent helplessness of Philippine authorities. Why are they not hunting more aggressively for Melissa? Have they shown the clip to Saudi police? If they haven’t they should as the face of the rapist is clearly visible in the video. And Filipinos should not forget that there is the death penalty here for rape, so they should be screaming for justice for Melissa.

Unfortunately, a Filipino colleague told me that he thought the Philippine government was deliberately downplaying efforts to find Melissa as they don’t want to rock the boat here. “They’re willing to sacrifice one OFW for the hundreds of thousands of jobs that other OFWs have here,” he told me.

I hope he’s not right, but the slow-mo actions of the Philippine government so far make it seem like he may be right after all.