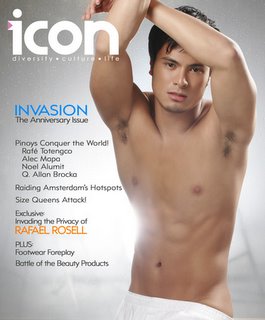 When I was in Manila a few weeks ago I picked up a copy of the gay magazine Icon. Correction: I think it was the magazine that was screaming for me to pick it up, what with the hot, hot, hot cover photo of aspiring actor and model Rafael Rosell, whose flawless body screamed out for attention as I walked by a newsstand to meet some friends for dinner in Makati.Apart from an interesting interview with Rosell, in which we learn that he was born and raised in Stavanger, Norway, by Filipino parents, there were equally interesting articles on Rafe Totengco, a bag and shoe designer in the US since 1989, and who counts Paris Hilton, among many other celebrities, as his client; an article on Noel Alumit, the Fil-Am writer of the novel “Letters to Montgomery Clift”, which I have read and found good in patches, and finally an interview with the Fil-Am filmmaker Q. Allan Brocka, who just happens to be the nephew of the late Lino Brocka, whom I consider to have been the greatest Filipino filmmaker ever. (By the way, his nephew admits to never having met the great Lino, which just might prove that artistic talent is indeed inherited.)The Bench underwear model Rosell (remember the huge billboards of him clad in only underwear that must have caused many an accident on EDSA?) reveals that Filipinos (surprise, surprise) are much more emotionally open than Norwegians: “Norwegians don’t open up as much as we open up here,” he tells Icon. “In Norway you do that, and they say ‘Are you gay?’ ….With my Filipino friends, it’s much easier to say, ‘Dude, I love you man.’”

Well this is a nice Blog on most important facts. I am happy to read this. But I am looking more and more info. Please add some thing more. I shall link from my blogs to this blog to day itself.
Last week I have found a nice informative guide on HIV from following URL http://www.helpcure.com/hiv/
This guide says - How To Cure HIV Through herbal medicines and Holistic Treatment. Guide claims that HIV viruses can't be killed but they can be ousted out of the body cells using bio magnetic repulsion or something written. I dreamt of a HIV free world after reading this guide.
Hope to read more from you people soon.
Wish you all a nice and fantastic Day for you

I don't care if he's not gay....I still want to lick his delicious body!!

Leeno I couldn't agree with you more on what you said about Middle Eastern men being homophobic! They act as if homosexuality is something totally alien in this part of the world...
And is Rafael gay? I have good news for your harmones, NO HE ISN'T!!! I googled him yesterday (with Rasheed) and we found out that he isn't!

I don't know about others, personally I don't see anything wrong with expanding one's horizons. Doubt you'd find me picking up the latest lezbian periodical.. but to each his own.

Ever notice that middle eastern men are either homophobes or .. you know.. just homo. heh..

Who would've thought there are interesting articles in a gay magazine? We assume it's just trash .. I hear they have jokes and articles in playboy loool.

For picking up a gay magazine, it is easy to think of you as something else, Rasheed. But we know, you are a journalist and it opens up an interesting perspective on otherwise taboo subject male model in underwear. The scantilly clad picture can be tiltilating to a few people (eroticism is essential component in gay magazine to sell). I wonder how the folks in the Middle East would respond.