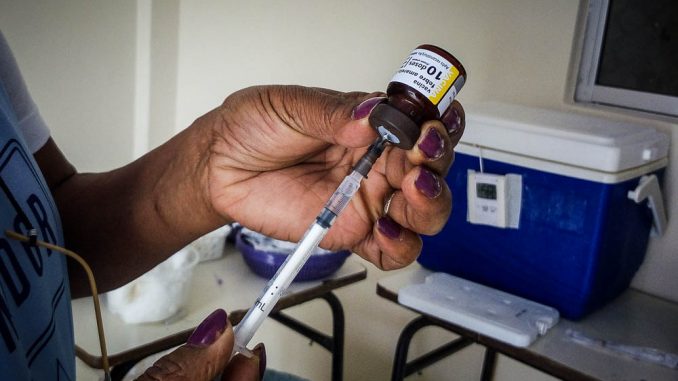 Brazil is trying to contain an outbreak of yellow fever that has already claimed 46 lives, by vaccinating inhabitants of high-risk areas.

There have been 568 suspected cases of yellow fever so far this year, with 430 still being investigated, 107 confirmed cases and 31 discarded ones, according to the Health Ministry.The outbreak is centered in rural areas of southeast Minas Gerais state, and the bordering areas of the states of Bahia and Espirito Santo.

“Apparently the state governments involved were rather slow in vaccinating everyone, but as soon as the outbreak happened they started to quickly vaccinate the population at risk,” Dirceu Bartolomeu Greco, an infection specialist and professor at the School of Medicine of the Federal University of Minas Gerais in Belo Horizonte, told Arab News.

“I think we may have reached the peak of the current outbreak. This serves as a very important reminder that the preventive part of this is perhaps the most important. I think this outbreak will be controlled.”

There is no known cure for yellow fever, so getting vaccinated is the best way to prevent contracting the disease.

It is a viral infection that causes fever, headache, chills, back pain, fatigue, loss of appetite, muscle pain, nausea and vomiting. In advanced stages it attacks the liver, causing the victim’s skin to turn yellow.

Brazil has been battling the disease since the mid-1800s. It originated in Africa and was brought to South America by slaves.

The Oswaldo Cruz Foundation (Fiocruz) in Rio de Janeiro has been leading the fight against yellow fever in Brazil since its establishment in 1900, and today produces millions of doses of yellow fever vaccine for Brazil and various countries in Africa.

The problem is that many people living in urban areas have rushed to public health posts to be vaccinated for free, causing temporary shortages of the vaccine in some cities.In Luziania, Goias, just 57 kilometers from the capital Brasilia, a suspected yellow fever death led to a rush on vaccination centers, causing a 30 percent increase in the number of people seeking vaccination, O Globo newspaper reported.

The federal government sent an extra 100,000 doses to Goias. The state government of Goias said 94 percent of its population is already vaccinated against the disease. The strain of yellow fever prevalent in Brazil is spread by mosquitoes living in rural areas, where monkeys are the common carriers of the virus.

The government recommends that Brazilians living in 19 states, mostly in the mid-west and north of the country, take the vaccine.

New scientific studies have shown that a single yellow fever vaccination could possibly protect a person their whole life.

“The advantage of the vaccine is that studies are showing that you’ll probably only need one dose to protect yourself for life,” said Greco.

Studies have shown that a single vaccination has protected some patients for up to 30 years. Current practice recommends that people living in or traveling to high-risk areas be vaccinated every 10 years.

The virus is transmitted in Brazil by mosquitoes in rural, heavily wooded areas, not by the Aedes aegypti mosquitos of urban areas that have already spread dengue fever and the Zika virus. This year’s outbreak of yellow fever has been the largest in Brazil’s history, Folha de Sao Paulo newspaper reported.