Saudi smoulders but is not on fire 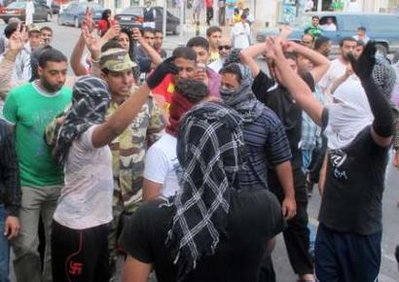 The "Day of Rage" called for 11 March in Saudi Arabia by democracy activists demanding a constitutional monarchy, an elected parliament, a written constitution and various freedoms fizzled out with barely a bang.A heavy police presence on the streets of major Saudi cities, including helicopters flying above, and an aggressive public relations campaign by the Saudi government warning would-be protesters that they faced imprisonment and possible flogging, made sure that hardly anyone appeared in the streets.

"I think the protesters were facing the challenge of actually going out on the streets. It is an experience they have never had before, and they might have imagined it to be like Egypt or Tunisia, but there was a vicious campaign vilifying anyone who dared think about protesting," said Abeer Mishkhas, a London- based Saudi journalist.Others doubted the authenticity of the organisers of the "Day of Rage", who had set up several groups on Facebook to gather support.

"It was hard for me to take the calls to protest seriously because the two Facebook groups that called for them simply looked too sketchy. Nobody knows who was behind these groups. The groups also had many non-Saudi members," said Ahmed Al-Omran, a popular Saudi blogger and currently a graduate student of journalism in New York.

Indeed, many Saudis supportive of the royal family tried to spin the non- events of 11 March as proof of the loyalty and love that most Saudis feel towards King Abdullah Ibn Abdul-Aziz Al-Saud, the absolute monarch of the kingdom.

Tareq Al-Homayed, editor-in-chief of Asharq Al-Awsat newspaper, wrote in his column that Saudis had shown their allegiance to king and country by not appearing on the streets last Friday to protest. "The reality is there was no chaos prior to Friday, but rather what we did see was a strong wave of incitement and confusion, and a desperate attempt by some -- who have now been exposed -- to promote a lie, namely the Saudi Arabian 'day of rage'. Everybody was surprised when this day of rage turned into a silent bayaa (ceremony performed in Islamic societies where the public formally endorse the rule of a leader), which saw the Saudi public wordlessly express their support for their leadership," wrote Al-Homayed.

Yet King Abdullah is worried that the recent revolutions in Tunisia and Egypt, and the ongoing violent demonstrations by Shias in neighbouring Bahrain, will affect the kingdom, so much so that he announced an economic aid package worth $37 billion upon his return to the country a few weeks ago after undergoing medical treatment in New York for three months. Government workers were promised a 15 per cent pay rise and billions of riyals were earmarked to help poorer Saudis finance the building of new homes. Yet many Saudis have criticised this aid package as too little and too late, noting that what many middle class Saudis want is a greater say in how the country is ruled, transparency in governance and accountability for corrupt officials.

"King Abdullah is not getting it. Buying loyalty is what he grew up with and continues to do despite the fact that he has been petitioned for a constitutional monarchy, accountability, transparency, elections, religious freedom and women's rights many times before and since he became king," said Ali Alyami, executive director of the Washington-based Centre for Democracy and Human Rights in Saudi Arabia.

Mishkhas said she was sceptical of the aid package: "People discovered that there are so many holes in it and in the end realised that it did not give them what they were promised. The salary increase for government workers was something that some of them were already getting on an occasional basis as a cost of living adjustment. But now that it has been made permanent, people were told that there would be deductions from it for their pensions and other things, so basically that increase did not actually happen."

The majority of recent protests in the kingdom have been undertaken by the minority Shias in the Eastern province of the country, where most of the country's oil reserves are located, asking for the release of terror suspects imprisoned for years without trial, and for better living conditions. Accounting for roughly only 10 to 15 per cent of the Saudi population of 27 million, Shias have traditionally faced discrimination in their religious practices and in gaining government jobs in the Sunni-majority country.

Some foreign observers of Saudi Arabia theorised that the popular revolts in Egypt and Tunisia could pose a similar threat to the ruling royal family in the kingdom. This uncertainty, plus the loss of one million barrels a day produced by Libya, which is experiencing a popular rebellion, sent world prices of oil soaring to above $110 a barrel these past few weeks. Yet support for King Abdullah is strong among most Saudis. Nevertheless, many are frustrated by a strict moral code that is enforced by the government-backed religious police, a high unemployment said to reach 40 per cent of Saudi men aged 18-25, and a lack of freedom of expression.

But even with these significant shortcomings, some young Saudis are afraid of the possible chaos that comes with public protests and have refrained from going to the streets. They believe that the country does not have a tradition of public protests, and say that democracy activists are imitating the West without adapting their demands to local customs.