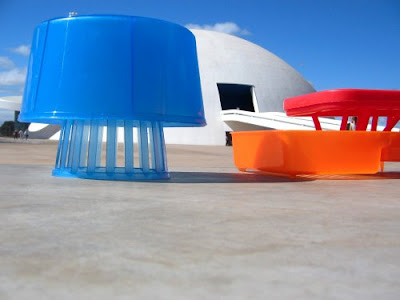 One of Yana Tamayo’s photographs of the National Museum
in Brasilia surrounded by ‘possible’ other buildings.

ON Tuesday night I went to the opening of an exhibition in Brasilia of young Brazilian artists. Held at the ECCO gallery, which is in front of the Liberty Mall and sandwiched between two car showrooms, the group of people gathered outside the gallery’s entrance made us think there was a line to get in. Fortunately, it was only people watching a man covered completely in yellow and black striped plastic strips posing in front of the venue and occasionally moving. This was supposed to be performance art, but I’ve seen better before. The people watching though were appreciative, clicking away with their digital cameras and cell phones.

The reason for the gallery being between two car showrooms became apparent when my friend Ricky explained to me that it was owned by Karla Osorio Netto, who comes from a wealthy family that also owns the car dealerships. “Oh, now I understand,” I said.
The gallery space is quite large, around twice the size of similar privately-owned galleries I have seen in Dubai. Divided into two floors, the ground floor was showing the work of two artists, Carolina Ponte and Pedro Varela, called Pontos de Encontro (Points of Encounter). Varela did pen and ink drawings of mystical villages that looked vaguely Russian. I found them a bit too illustration-like and juvenile, but Ricky said that’s why he liked them. Ponte does huge, colorful drawings of cities that span whole walls, and looked to me like something trendy and hip parents might have commissioned for the walls of their darling children.
Upstairs the exhibition entitled Um Lugar a Partir Daqui (A place starting from here) was much more experimental and interesting. Sponsored by Itau Bank, which claims to be the largest bank in Latin America, it included mainly installations and photographs. My favorites were Barbara Wagner’s color portraits of men taking part in a street festival; Vitor Cesar’s series of seven photographs showing a man standing behind various different shop awnings, his head cut-off, and the Brasilia-born Yana Tamayo’s series of photographs questioning the iconic Brasilia architecture of Oscar Niemeyer.
Tamayo took plastic bowls and placed them on the ground in front of the Niemeyer-designed National Museum building in Brasilia, that looks like a giant, white flying saucer, and then photographed them from various angles. Ricky and I were able to track Tamayo down at the opening and she told us that she was trying to question the use of public space in Brasilia by producing the series of photographs in which she introduced new objects into the iconic skyline of Brazil’s capital that will be celebrating its 50th anniversary next April.
Tamayo will be exhibiting other photographs at another exhibition scheduled to open June 23. She has promised me an invitation, so I will write about it when I go and see it.
— The Pontos de Encontro exhibition will be open until August 2, while the Um Lugar a Partir Daqui show will only be up until July 19. Call the ECCO gallery for more information, 61-3327-2027, or visit their website www.eccobrasilia.com.br.
Share: